Home > Blog > Criticism of Operating Beyond the Capacity at Luton Airport

The capacity at Luton airport has been increased by the officials beyond the limit, despite of recently starting its major expansion of infrastructure at the site. Many residents near St. Albans are protesting about this act of Luton airport.

Among those unhappy with Luton’s services is Ian Salkey, director of St. Albans School of Languages in Market Place, who drives to the airport several times a week to drop off and collect foreign pupils. Ian is fed-up after constantly being stuck in traffic jams when approaching the airport, despite leaving in good time from St. Albans.

He has seen other passengers jumping from stationary vehicles and running along the carriageway, hauling their suitcases behind them, in order to catch flights. He said:

“It is very chaotic. Most people you speak to have a story to tell of rudeness, long waits etcetera. The problem is you go through Capability Green, where you turn into Luton, when the queues start, and it can take an hour to get to the Holiday Inn roundabout.

You can get two hours’ free parking in the long-term car park, but if you arrive back at your car just one minute over that limit, you pay the full daily rate of £25 – that is not clearly signed.”

Luton Airport staff has slammed their employers for operating beyond capacity and creating “chaos” according to a local campaign group.

In the latest London Luton Airport Town and Village Communities Committee (LLATVCC) newsletter, campaigners say there have been traffic jams extending almost back to M1 J10a, even at 4.30am. 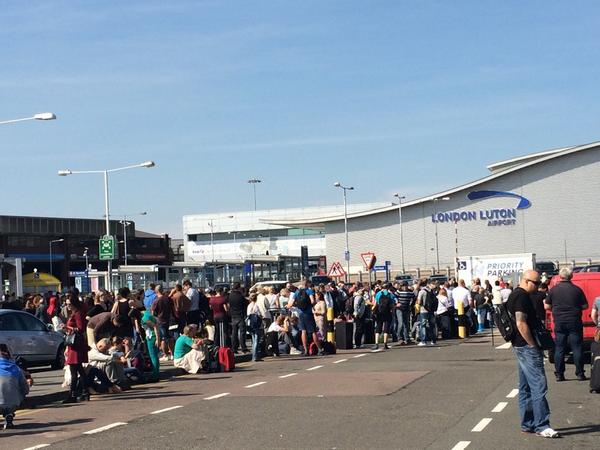 Response from the Airport

A spokesman for Luton Airport has apologised to the passengers for any inconvenience or disruption caused by the major construction works and thank them for their patience. In his response, he added:

“We have accelerated the construction work to meet the demand of rising passenger numbers. When fully completed, the £110 million transformation will mean enlarged and improved facilities throughout, making travel through the airport quicker and easier than it has ever been.”

The stakeholders of Luton airport need to solve this problem immediately because people are having serious issue there. But we have a useful tip for them. Avail Luton airport meet and greet parking service for car parking and avoid all the hassles there.